Demographic Facts for the United States 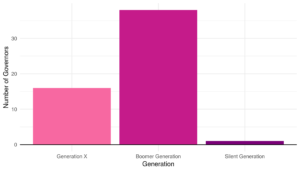 Of the 55 U.S. Governors, 45 are men and 10 are women. Of the 38 Governors belonging to the Boomer Generation, 6 (almost 16 percent) are female. The percentage of women in Generation X is slightly higher with almost 19 percent (3 out of 16 are female). Five of the 10 women currently serving as Governor began their political careers as Young Elected Leaders.

Gender by Generation of U.S. Governors 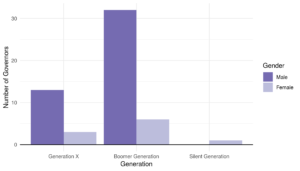 Ethnicity by Generation of U.S. Governors 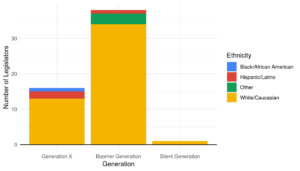 Almost half of all governors are members of the Republican Party (28 of 55). Twenty-five are Democrats (including Timothy Waltz, who belongs to Minnesota’s Democratic–Farmer–Labor Party DFL). One governor is an Independent, and other belongs to the Puerto Rican PNP.

There are generational differences with regard to partisanship. Slightly more governors belonging to Generation X are Democrats. In the Baby Boomer Generation, there are more Republicans than Democrats. Governor Kay Ivey of the Silent Generation belongs to the Republican Party.

Partisanship by Generation of U.S. Governors 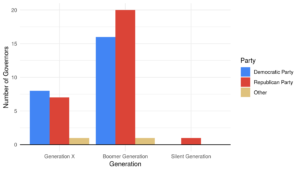 Of the 55 Governors currently serving in office, these 12 began their political careers as Young Elected Leaders: