Demographic Facts for the United States

About the 2018 Midterm Elections

On November 6, 2018, 468 seats in Congress were up for election: 33 seats in the Senate and all 435 seats in the House of Representatives.¹ Following the primaries, 1370 candidates ran for the general election. Of these candidates, 479 ran as Democrats and 453 as Republicans. Almost 440 ran as third-party candidates or Independents.

Generational Composition of the Candidate Pool

Of the data available on candidates, 9% (124) were Millennials.2 Of these Millennials, 72% were 35 years of age or younger. Thirty-seven percent of the candidates were Baby Boomers, 26% were from Generation X, and 5% were from the Silent Generation. Of these 124 Millennials, only 8 ran for the Senate and the remaining for the U.S. House of Representatives.

Millennial Candidates for Congress 2018 by State and Party 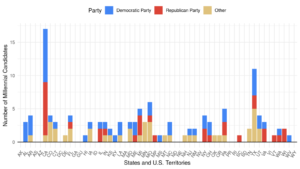 Of the Millennials running for Congress, 26.6% were women and 73% were men. When we focus only on those Millennials 35 years or younger, a smaller percentage (20.3%) are women and 79.8% are men. It is worth noting that all 8 Millennial candidates for the U.S. Senate were men.

Regarding the ethnic and racial background of Millennial candidates, most were White followed by African American and Hispanic/Latino. 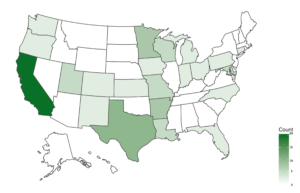