The Nebraska State Legislature is a unique political institution in the United States. It is unicameral and non-partisan, its nickname is “The Unicameral”. There are 49 seats, members are referred to as senators. The last election took place November 6, 2018. In order to qualify, a candidate must be at least twenty-five years of age.

The Nebraskan population roughly reflects the demographic composition of the United States as a whole.1 The largest generation with 24.40% is the Baby Boomer Generation, followed by Millennials (22.60%).2 About 20% of the population belong to the Generation X. The smallest generation is the Silent Generation (11.4%).

The large majority of Nebraska’s population is White/Caucasian (79.80%).3 About 4.6% are Black/African American and 10.50% are Hispanic/Latino. There are 5.10% that identify as other ethnicities or that have two or more ethnicities. 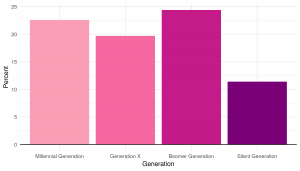 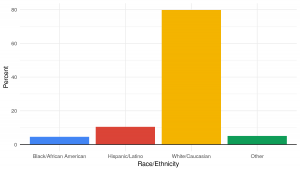 The largest generation in the Nebraska State Legislature is the Baby Boomer Generation. With over 63%, Baby Boomers are considerably overrepresented. Generation X and Millennials are represented with 16% each. The Silent Generation is the smallest in the legislature with about 4%. 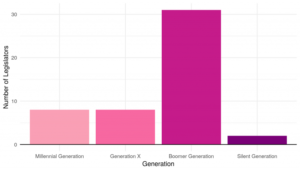 Women are underrepresented in the “Unicameral”. Only 28.5% of the senators are female. There are generational differences with regard to gender. The Millennial Generation and Generation X are gender-balanced, whereas women are significantly underrepresented in the Baby Boomer Generation. Among Young Elected Leaders, the gender composition is balanced as well. The mean age for female senators is 47, whereas the mean age for male senators is 59. 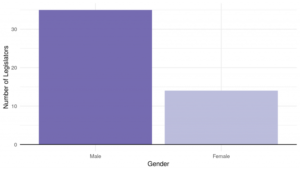 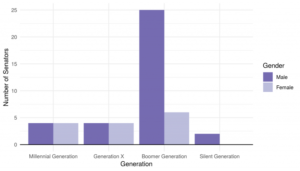 The “Unicameral” is comprised of 95.6% White/Caucasian senators, vastly underrepresenting ethnic minorities. There is one Black/African American senator, Ernie Chambers of the Silent Generation, and one Millennial Hispanic/Latino senator, Anthony Vargas. 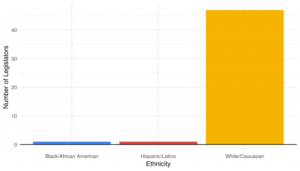 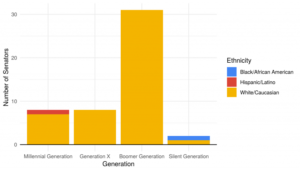