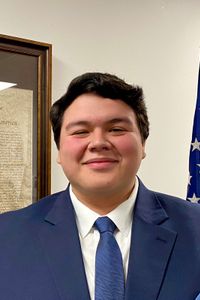 Edgar Gonzalez Jr. (age 25) is a community activist and represents the 21st district in Illinois’ House of Representatives. Gonzalez was born and raised in Chicago’s Little Village neighborhood and attended Harvard University, where he was a political cartoonist for The Harvard Crimson and a staff writer for the Harvard Political Review. Upon graduation, Gonzalez began working as a constituency services liaison for Congressman Jesús “Chuy” García. On January 10th, 2020, Gonzalez was appointed to his seat by local Democratic leaders to replace Celina Villanueva. At the time of his inauguration, Gonzalez was the youngest state representative in Illinois at just 23 years old. He is the youngest Latino state representative and youngest state Democratic representative to ever be inaugurated in Illinois. Learn more about him here.

Gonzalez steps into role as a Riverside state rep