Under the direction of Dr. Elizabeth Matto, Director of the Center for Youth Political Participation at Eagleton Institute of Politics, the project features instructional methods that foster active citizenship. The project’s hallmark is the central role played by a team of Rutgers students who work directly with local high school students and administer interactive sessions. Such peer to peer contact improves the likelihood that the lessons of RU Ready will be absorbed by the students experiencing them. The project currently is administered in area high schools and includes a series of in-class workshops, the RU Ready Young Leaders Conference and the RU Ready Civics Fair.

Piloted during the 2007-2008 academic year, the project has received support from:

RU Ready’s in-class workshops are conducted by a team of RU Ready Rutgers students and include evidence-based instructional techniques designed to foster active citizenship. Conducted over three distinct sessions, students are introduced to the four facets of political engagement, young role models who exemplify the facets and simulate the political process by tackling a fictional but relevant issue. 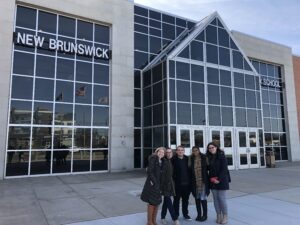 Use Your Voice! – Through group discussion, students explore the strengths of their generation, the relevance of politics in their lives, and the various methods of civic and political engagement available to them. The high school students also voted on a the issue they were going to tackle through a legislative civic action project.

Engaged Role Models – Students were introduced to political engagement skills that go beyond running for office and voting. Recognizing young people engaging in political discussions, protesting and volunteering to solve problems directly in their communities, students learned how to use their own skills to make a difference.

Practicing Politics– Urged to think critically on the issue of their choosing, students presented their civic action campaigns to a panel of lawmakers that was either in support or against the legislation.

How might these sessions improve your role as a community member of New Brunswick?

“It helps me see things in a different perspective” 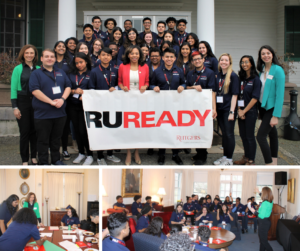 As a culminating activity, a conference is held at the Eagleton Institute of Politics for representatives of participating high schools. The day-long conference involves exploring youth political participation and “Generation Z”; revisiting the lessons learned in the classroom regarding avenues of civic engagement; and offering practical suggestions to young people not only interested in community involvement but in assuming leadership positions in their communities.

RU Ready encourages students to pay attention to politics and gain information on what is happening in their community. Students at New Brunswick High School participated in Civics Trivia during the civics fair. Some questions included: 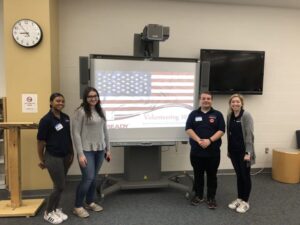 The Eagleton Institute of Politics’ Center for Youth Political Participation (CYPP) at Rutgers—New Brunswick announced the national expansion of its RU Ready civic engagement initiative. The launch begins with new RU Ready programs at Drew University in New Jersey and the Annette Strauss Institute for Civic Life at the University of Texas at Austin this spring – with plans to expand the program to more universities over the next few years. The announcement comes on the heels of recent data that shows a significant increase in youth political engagement across the United States.

RU Ready helps local high school students develop the political and expressive skills needed to address public problems in their communities. College students are also trained to be peer educators by delivering a series of RU Ready lesson plans in nearby high schools. Additionally, the program includes a one-day young leaders conference and a civics fair at participating high schools. RU Ready students learn to think deeply about how the American political system works and effectively build civic skills in the classroom. The national expansion of the program will create a network of scholars, practitioners, teachers, and students interested in studying and encouraging youth political participation.

During the first phase of the expansion, Matto and other CYPP staff will partner with Drew University and the University of Texas at Austin to maintain the core evidence-based techniques already built into RU Ready. Staff will also explore alternative methods to customize the curriculum to meet the needs of each college campus and their partner high schools.

Want to Be a Part of Expansion?
The Center for Youth Political Participation is keenly interested in expanding the network of RU Ready programs. Interested schools should contact CYPP to learn more.

Launched in 2002 with funding from the Pew Charitable Trusts, the Young Elected Leaders Project (YELP) studies and works with young people who run for public office.